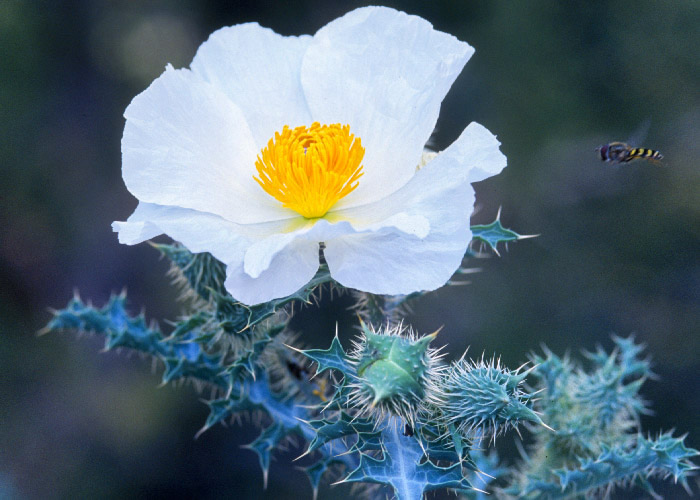 This page contains a brief introduction and some highlights of this proving. A complete booklet of the proving results will be available to purchase. Please help support Homeopathic research.

This remedy can also be compared to Argemone mexicana, a previously proven homeopathic remedy. There is much similarity between these two remedies. Argemone mexicana has had little usage historically, mostly for the treatment of arthritis combined with Bright’s Disease and colicky cramps and spasms of the bowels.

Argemone pleicantha can also be compared to other Papaveraceae remedies. Strong overlaps between Opium, Chelidonium and Sanguinaria can be seen. A detailed comparison is provided in Appendix A of the proving booklet.

Many of the symptoms and themes that arose in the proving are typical of a drug remedy. This is not surprising in view of the strong narcotic properties of the plant and its botanical similarity to Opium. Similarity to other common drug remedies is explored in Appendix A. Typical drug themes include:

Out of body feelings

Feelings as if in a dream

Feelings of isolation and separation

Distortions of time and space

A central theme of Argemone pleicantha is the great feeling of irritability when with people and the feeling of peacefulness and bliss when alone. One prover described it as content and calm internally, but irritable externally. Several provers stated that it felt as if ‘people would waste their time’ and ‘I am tired of having to put up with others’. They needed to push people away. This is similar to the plant itself. Argemone is very poisonous. There are no creatures (other than mourning doves) who are able to eat the fruits and seeds. When cattle have been allowed to overgraze a pasture, this plant grows in profusion.

The irritability was accompanied by a strong desire for one’s own space. Individuals in the proving desired to be in a dark cave. They described this as being underground in the dark. There was a desire to remain in bed, which provided a feeling of darkness, holding and safety.

Another strong theme was that of apathy, emotional numbness and disconnection. The plant is well known to have analgesic properties both when smoked and when applied topically. Many of the provers likened the experience to that of using recreational drugs when they were younger. One prover described the apathy as ‘I would have difficulty feeling enough; it was almost that I did not want to be bothered with my patient’s stories; I felt numb emotionally and no interest in others; removed and indifferent; disengaged from life; I had a job shift at the beginning of the proving; a job came to an end; feel like I should have been more upset about it than I was; I feel like I am in a bubble; I could not make a connection with people; invisible barrier between me and others’. This was also described as a ‘numbness towards others’. Another prover described dreaming that she was dying, but feeling peace and no distress. The natural connection to affection seems to be broken with this remedy.

The inverse side of this came out in dreams of social gatherings and contacting old friends. One prover had the cured symptom of feeling much more affectionate towards her students and caring how they felt about her for the first time. She also went back to visit her childhood hometown for the first time in years. Previously, every time she went home, she felt great anxiety and distress. During the proving, the trip was accompanied by a feeling of warmth and peace for the first time. She states that ‘the anxiety was caused by having a tremendous lack of nourishment while I was growing up’.

Most centrally, this apathy rose around the issue of children. One prover had a recurrent dream of being pregnant and that the baby was dead and yet she felt nothing. The feeling was one of not caring for one’s children and not feeling nurturing.

Chocolate was also a strong theme through the proving. This is not surprising in that this remedy has much similarity to the remedy Chocolate. Both represent drug remedies and share the feeling of separation and turning one’s back on one’s children. Chocolate also represents a way of self-nurturing when one cannot feel this from the outside.

A strong general characteristic was the sensation of prickliness. This was confirmed in the flower essence proving. This is a common sensation when brushing up against the plant and part of its common name. Itching was also a recurring theme in many of the physical symptoms throughout the proving, accompanied by stinging pains. The plant sap has been used historically to treat heat rash, hives and groin itching. Rashes were noted on the thighs in several provers immediately after taking the remedy. What was characteristic about the rashes was their checkerboard pattern.

The idea of prickliness also manifests through the sensation of sand that recurred throughout the proving. It is interesting to note that the plant prefers sandy soils. ‘Pain in small spots’ was another related symptom that was a general characteristic noted by several provers. Prickliness can also be seen on the mental and emotional level in the form of easy irritability and easy anger.

Another general symptom that came through strongly was lassitude. This was worse in the afternoon. This was also a prominent symptom of Argemone mexicana.

Physically, the remedy has strong connections to the urinary tract, female reproductive system, vertigo, eyes and gastrointestinal tract. Urinary symptoms were quite strong. The most characteristic symptom was a strong urging to urinate which was seen in five of the thirteen provers. Kidney pains were noted. The plant has been used historically to treat urethritis and prostatitis. The proving demonstrated symptoms consistent with urinary tract infections and urethritis. The herb has been used historically to treat Bright’s Disease (which is a kidney problem). Interestingly, these symptoms spilled over in the dreams. One prover also had the recurring sensation of feeling that they were urinating in front of others.

Several of the provers described feelings consistent with the first trimester of pregnancy. This included symptoms of morning sickness. There were also itching, eruptions and swelling of the breasts that was menstrually related. One prover who had not had her periods for over a year found her menses restored after the remedy.

Five of the thirteen provers experienced symptoms of vertigo. The strongest characteristic was that it was worse from motion. Several provers associated the vertigo with the feeling of being disconnected from the world or that reality seemed distorted. Vertigo symptoms were confirmed in the flower essence proving.

The majority of the provers experienced eye symptoms. This included foggy and weak vision, swelling of the lids, lachrymation, itching, agglutination, dryness and a sensation of sand in the eyes. In ancient times, herbal Argemone was used to treat cataracts and ophthalmia.

Cramping abdominal pains were also confirmed with this proving. Six of the thirteen provers experienced these pains. The tea has reportedly been used as an antispasmodic. Crampy pains are also prominent symptoms of Argemone mexicana. These symptoms were frequently accompanied by nausea and loss of appetite. Nausea was noted in five of the thirteen provers. The tea has been found to be helpful for hiatal hernias. Diarrhea was also common. There was straining accompanying the rectal symptoms and a feeling of never getting done. The seeds have been used as a cathartic.

Palpitations were noted in only one prover. However, the tea has been noted to ameliorate heart palpitations.

Back and hip pain was fairly severe in several provers. One prover elected to end the proving prematurely, because of this pain. Back spasms were noted. Feelings of tension in the back were common.

Eight of thirteen of the provers noted significant headaches. For some, these were disabling. The headaches were worse in the morning and tended to localize in the occiput, or the occiput extending to the forehead. Several provers noted headaches in small spots.

Sleep tended to be deep and profound. The plant has been used as a tea to help induce sleep. Interestingly, the homeopathic provers noted a sharp decrease in dream activity. This is in sharp contrast to the flower essence proving where provers noted a marked increase in dreams. The flower essence proving also noted a capacity to resolve old issues from the past through dream work. This was much less noted in the homeopathic proving.