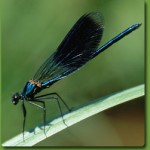 Jeremy Sherr  www.dynamis.edu :  I vividly remember the moment the Calopteryx (Damselfly) proving began. Camilla and I had taken the remedy 40 seconds earlier and we were already suffering: It was that quick. Our sinuses filled up, our noses became blocked and a severe congestive headache set in, followed by coryza and some of the loudest sneezing I have ever heard, an irritating proving symptom that Camilla retains to this day. So much for slow and mild homeopathy!

In a way I was happy. It proved my theory that insects with short life spans would suit rapid, acute diseases. We have used Calopteryx many times since in acute influenza, hay fever and sinusitis. But there is much more to Calopteryx than this. Before its short and colourful existence, the dragon or damselfly lives as a nymph under the water for several years. Moreover, this insect has inhabited our planet for around 400 million years. These lengthy aspects of its communal lifespan indicate its chronic nature, about which you can read in the following proving and cases.

It is perhaps the contrast between the two that characterises this remedy most: acute and chronic, fast and slow, young and old, spiral and line, damsel and dragon.

It is the beauty of this insect and its amazing flying skills that capture the imagination. I was attracted to prove it on a summer’s day in Finland, watching the vivid blues, greens and silvers hovering over the sea. I had received many omens that week: a TV program, a book and a discussion on dragonflies. It was the photographer of that book that provided us with the specimen of calopteryx splendens. Ladies and gentlemen, I present you the damselfly.